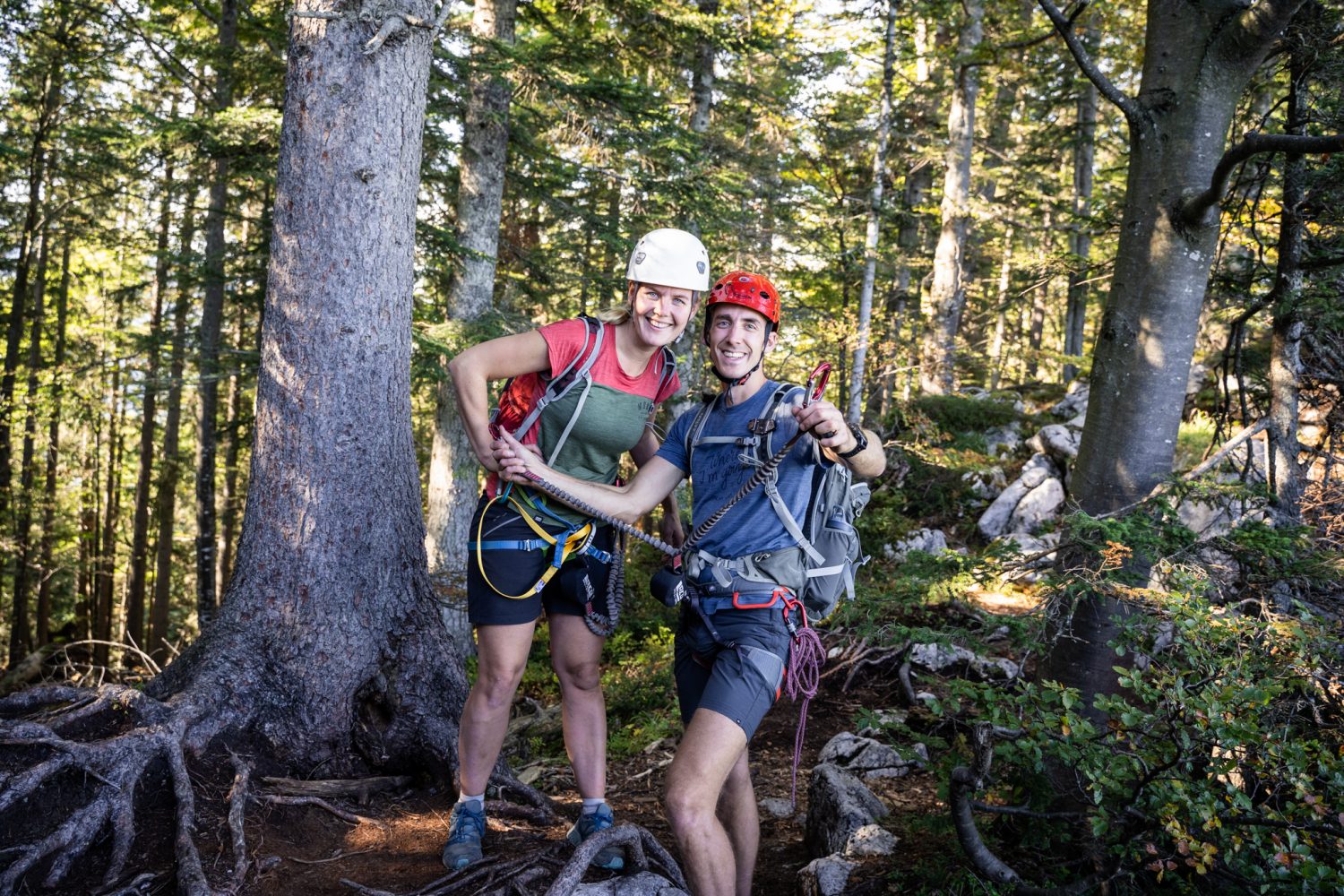 The last blog we wrote was in about the first month in the Vletter-Van. In the meantime, we are already 3 months down the road and the sun has taken us to southern Europe.

After our incredible time in Norway, we were able to admire the stunning northern light and Ruska in Finland.  After that, a turbo city trip through six countries followed because Helsinki (Finland), Tallinn (Estonia), Riga (Latvia), Vilnius (Lithuania), Cracow (Poland) and Vienna (Austria) joined each other in a rapid pace. During that time we had a number of fellow travelers because Femke (Jorg’s mother) traveled 5 days with us and together with Elwin and Nienke (Jorg’s sister and her friend) we made Vienna unsafe on electric steps.

The mountains are calling (again)

Slowly the approaching winter pushed us more southwards and after all the urban violence, we were ready to go back to the mountains again, which are so trusted to us. First the Austrian Alps, then the Italian Dolomites and now the Julian Alps in Slovenia. All beautiful, but still the Dolomites have a special place in our hearts. The rawness of the mountains, the coziness of the Italian coffee shops and of course the taste of the Italian kitchen, it suits us perfectly. And fortunately, we were able to share this with family when we spent an active late summer week together with Hans & Inge (Nadine’s mother and her husband).

The beautiful autumn colors have been coloring the different landscapes around us for some weeks now. But it is now clear that autumn is letting go of its grip on nature and winter is approaching. Where it is still 25 degrees celsius at the moment, snow is scheduled for next week. Life and traveling with the Vletter-van is fantastic when the weather makes the outdoors our living room. But spending most of the winter indoors on 2,4 m2 is not what makes us the happiest so it was time to give shape to the next chapter of our traveling life. And we have many special things to look forward to.

It was already certain that we would visit the Netherlands again in December because of the birth of a little one of Nadine’s brother. We decided we would spend the holidays with family as well. And then we got an idea, shall we finally get married in December?

Because we really want to be married and 3 years ago I got down on my knees for Nadine in South Africa, but we canceled our wedding in 2018 because of the passing of my father. But organizing a wedding within 2.5 months from abroad that requires some help so after a phone call with Nienke (our boots on the ground from now on), some agenda tetris and a municipal wedding request it was settled. Moved but with a big smile and some nerves it’s certain, we are getting married December 13, 2019. And so there is now an appointment in my calendar, to which I have answered ‘maybe’ just to be sure ;). Arranging your wedding day from abroad creates unique and fun situations, to which we will dedicate a separate piece of writing.

Apart from getting married, we have also talked a lot lately about whether what and how we want to continue our lives. This clearly showed that we are not tired of traveling yet. Cycling 7000 km was a unique chapter, 5 months of living out of the Vletter-Van as well and we’d like to add a ‘last’ flavor. Both of us feel the need to be challenged by something new and to dedicate ourselves to something. So we went looking for projects, work/living places via workaway or volunteering in e.g. Greece. But we also looked at working in winter sports areas because Nadine really wants to do some winter sports again and we also want to get a taste of what it’s like to live in the mountains. During this search, Mark came up with someone he had just met, who is living in a chalet in the French Alps and could use help for the winter season.

From a noisy coffee/bookstore a Skype conversation with Sally-Ann and Simon followed and when we had hung up one look was enough. 4 shiny eyes and 2 big smiles, this is exactly what we were looking for. A place in the mountains, where we can contribute to something more than just snow fun and where we can work together and in this case also live together with beautiful people. From whom we certainly can learn a lot and where we can get a taste of things that we like to integrate into our own lives in the future. So from January until sometime in April we live and work in the French Alps and occasionally find ourselves on the slopes. However, let this be the only sport that does not appear in the assortment of our small Bever. So we have to do some winter gear shopping.

It also means that we will leave our mobile house in December as the Vletter-Van will be left behind in the Netherlands. That will take some getting used to because we are really attached to ‘our’ little house.

For now, we’ll be in Slovenia and Italy for another 2 weeks. Then we’ll both fly from Milaan to have a weekend with friends. Nadine in the Netherlands and for me somewhere else in the world. After that, I also come to the Netherlands to shop with the rest of the Vletters for the wedding. Eventually, we’ll fly back to Milan and have another 3 weeks to get everything out of Southern Europe and the Vletter-Van.

In the end, all we have to do is drive back to the Netherlands where we will arrive a few days before we are getting married and we will meet all our friends and family at our wedding.

We are looking forward to it and feel very privileged about what the past year has been like for us and what the coming months have in store for us.

And the way we think about it now, in May 2020 we will be back in the Netherlands for a while, but first….

First we will enjoy it to the fullest!