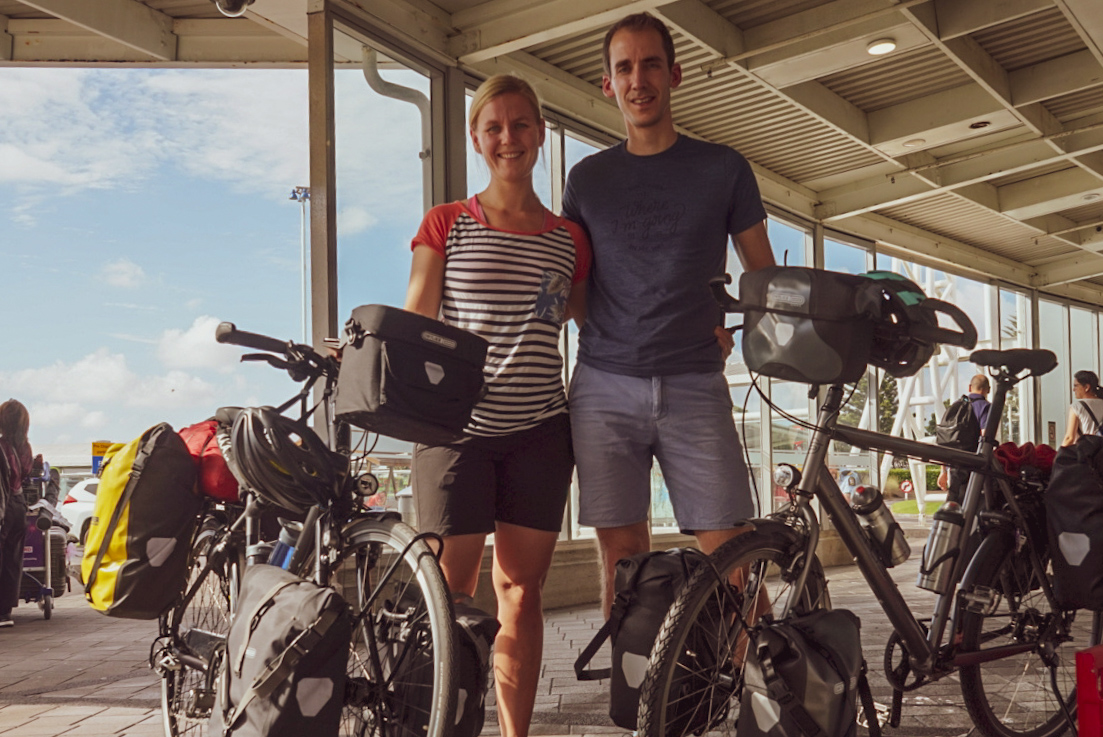 We were not looking forward to travel 30+ hours to New Zealand but afterall it wasn’t that bad. During our stopover in Kuala Lumpur we stayed on the airport and made use of a airport lounge, took a shower, had some diner and hopped on the next flight. We were lucky then, because we had four seats just for the two of us. Immigration
We collected our bags and two big cardboard boxes and went through immigration and customs. Our shoes were checked for dirt, the bikes and boxes got a visible inspection for contrabant, our bags went trought the x-ray and our tent went on a trip through biosecurity. It was all good so…

First pedalstrokes
At the airport they have a bike assembly area, so we drop our stuff there and went to work. It’s a strange experiencec to assemble your own bike on the other side of the world. Even more strange is then pack your bags on it and just cycle off. Pretty cool we must say.

We cycled our first 20km’s to Ambury Park, in the NZ sun which was lovely after leaving winter in Holland.

Ambury park is a regional park and quite beautiful, so we pitched our tent and got some grocery’s for diner. After diner we were totaly naggered of the whole trip. The second day we discovered the surroundings a bit and had a relaxing day. In the beginning of the evening I became sick which meant spending the whole night on and above the toilet. Which was a compost toilet whith an absolut terrible smile, lucky me. After a horrible night and being realy sick we had to decide to move to a hotel with better facilities and airco. We just had to cycle 13 km for it, which was a marathon for me, so after arriving at the hotel I slept for 20 hours.

We used the following days to recover from being sick, regaining energy and sleeping of the jetlag.

Sun & music
Saturday evening we were feeling well enough to go to Gentlemen of the road festival in Western Springs. We really enjoyed the performance of mumford and sons. And it was the first time we really realised where we were and what we started with.

Ready to go
We our now in an Airbnb of Colleen and Biill in the east part of Auckland. It is aways nice to stay with people to get to know the country and culture better. We noticing we’re done with the city at this point, ready to take the bike and start with our purpose of coming here, bike touring from north to south.

Tomorrow we are heading in the direction of the Coromandels.

p.s If you wanna know where we are check out the travelmap.